If you come in Tuscany “Cantucci and Vinsanto” is a dessert that you must try out.

Here some secrets about these two Tuscan specialities!!!

Cantucci are dry biscuits with almonds, that can be obtained cutting in slices the still hot dough.

The Cantucci’s dough is composed by very simple ingredients like : flour, sugar, eggs, almonds and butter. We can replace sugar with honey and the butter with olive oil. The almonds inside Cantucci usually are not toasted neither peeled.

In Tuscany Cantucci are usually tasted deeping them in a dessert wine, named “Vin Santo”, an artisanal fortified wine obtained through dried grapes. 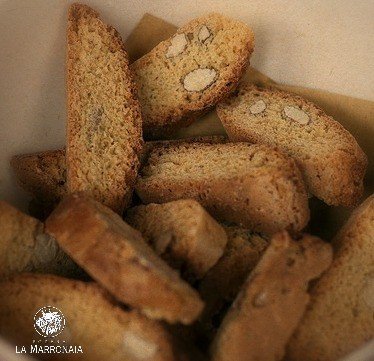 The History of Cantucci

We can find an official consecration of Cantuccini in the Accademia della Crusca’s dictionary that in 1691 gave to these biscuits the following definition: “ biscuits in slices, with flour, sugar and albumen” .

The most famous Cantucci of that period were produced in Pisa, while the almonds joined the ingredients just in some variations, like the “bisottelli” in the era of Caterina de’ Medici. Then in 1800 the almonds became a primary ingredient of Cantucci.

The first recorded recipe of the Cantucci was a manuscript of Amadio Baldanzi, preserved in the Prato Municipality’s Archive. In this document the biscuits were defined “alla Genovese”, that means “ of Genova”.

In XIX century Antonio Mattei, a baker from Prato, developed a recipe of Cantucci that after became the classic one and received important awards at different exhibitions not only in Italy but also all over the world, in particular one Special Mention at the Universal Exhibition of Paris in 1867. The “Mattonella” Bakery ( popular name of Antonio Mattei) exist also nowadays in Prato and it’s the depositary of Cantucci’s tradition.

The Original Recipe of Cantucci 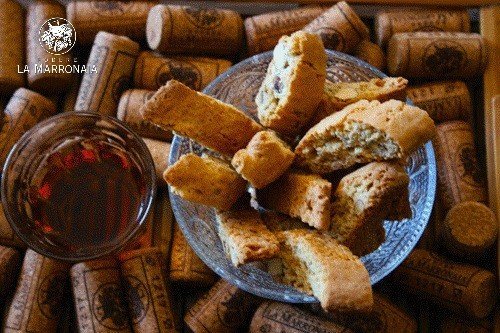 The origin of the name

There are few versions about the origin of the name Vin Santo (Holy Wine).

The first comes from Siena where a Franciscan father in 1348 used to heal the victims of the plague with a wine that was usually used to celebrate the Mass. The certainty that this wine had miraculous properties was propagated between the population,   and for this reason the wine obtained the adjective of “Santo”, “Holy” in English.

Another version come from Florence: During the Council of Florence in 1439, Giovanni Bessarione, a greek member of the council proclaimed, while was drinking the Holy Wine: “ This is Xantos’ wine!”, but maybe his words were concerned about some kind of greek sweet wine from Santorini. The other members of the council confused the word “Xantos” with “Santos”, and believed that the wine owned some qualities worth to be defined “holy”.

The most credible version is that the wine was usually used during the mass and for this reason obtained the adjective of “saint, holy”.

The Santuccio della Marronaia is a fortified wine that has a long tradition in Tuscany.

We obtain this particular sweet wine from a blend of Trebbiano grapes and Chianti’s Malvasia, letting these grapes dry out for 3 months after the harvest.

The bottles are subject to a long ageing.