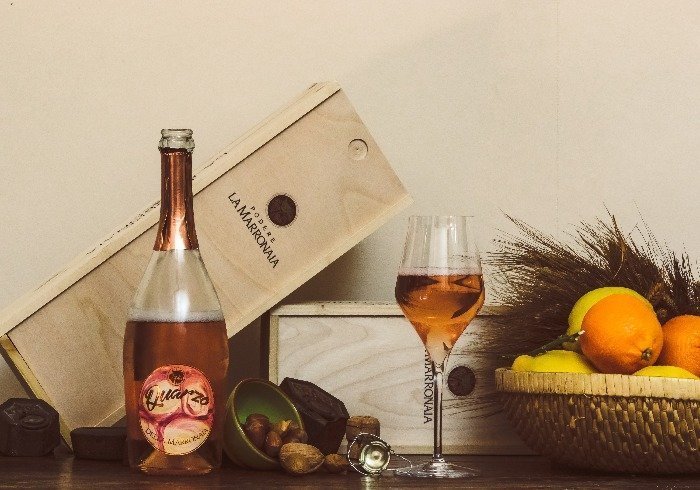 The grapes come from the vineyard of Podere La Marronaia, on the hills of San Gimignano, in the heart of Tuscany.

The wine is fresh, dry and sparkling, delicate and with hints of fresh fruit, like cherries, plums, blackberries, and tomatoes. It remembers a very light red wine.

The period of the harvest is in September. Harvesting is done by hand, and after we bring the grapes immediately in the cellar

For its production, we use the Classique Method: The so-called classic way (though not the oldest) to produce sparkling wine is popularly known as the Champagne method or Méthode Classique which is the official EU designation.  The wine is fermented once in the barrel and then undergoes a second fermentation in the bottle after the addition of yeast, nutrients for the yeast, and sugar (known as tirage). The second fermentation results in natural sparkling wine. Yeast precipitate (lees) must then be removed. This begins with riddling (remuage in French) which means that the bottles are turned with the neck downwards and lightly shaken to move the lees to the neck of the bottle. This is done in small steps where the bottle orientation gradually changes. Finally, the inverted bottlenecks are cooled so that the precipitation freezes to a small block of ice, the bottles are turned upright and the temporary closure (normally a crown cap) is opened so that the precipitate is pushed out by the pressure in the bottle. Then the bottle is filled to replace the missing volume, and fitted with a plain Champagne cork and halter. The process to remove lees is called disgorging.

This way in the first days of March the Quarzo is made according to this method, after which the bottles remain laden for at least 24 months in order to enhance the complexity of the wine. 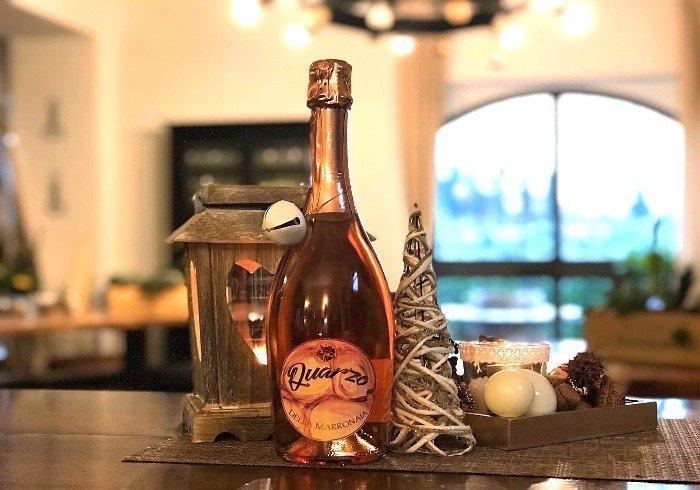 Why the name is Quarzo Della Marronaia?

You have to know that the idea to create this wine was suggested by the women of our farm. When the Rosè sparkling was ready we saw its beautiful pink color and we immediately knew that women all over the world would appreciate this light, refreshing and pink wine. The name came up, the Quarzo ( in English Quartz) is a precious and pink stone, like women that are precious and have a pink soul like a Quartz.

Olfactory Examination: fresh, with a large and delicate bouquet of cherries, plums, and berries.

Taste examination: At the palate is fresh and elegant, to the sweet finish.

Recommended matches: Perfect as an aperitif, you can also pair it with pasta, fish or pork meat, as well as a dessert.

Cocktail with our Quarzo: Rosé Aperitif

Grind 8 fresh mint leaves with 2 teaspoons of sugar and half of a lime peel.

Transfer the pesto into the glass of the shaker and add a teaspoon of lemon syrup and a splash of lime juice. Mix, filter and, divide the mixture into 4 glasses, add plenty of crushed ice and fill with our Quarzo Della Marronaia and a few drops of Porto.

Find out more or adjust your settings.