SAN GIMIGNANO – 10 PLACES THAT YOU HAVE TO VISIT

The foundation of San Gimignano dates back to ancient times. According to legend, in 63 B.C. two brothers, Muzio and Silvio, two young patricians escaping from Rome after their implication in the conspiracy of Catiline, sheltered in Valdelsa and built two castles: the Castle of Mucchio and the Castle of Silvia, which would develop in the future San Gimignano.

The first historical document mentioning the name of the town is dated 30th August 929, when Ugo di Provenza donated to the Bishop of Volterra the so-called Mount of the Tower “prope Sancto Geminiano adiacente” (next to San Gimignano).

The name of San Gimignano probably comes from the bishop of Modena. According to legend, during the barbaric invasions, the saint appeared miraculously on the city walls and saved the town from Totila’s threat. The beauty of the village is shown once you arrive and you’re able to see the incredible skyline of the Medieval towers.

You will find tones and tones of hidden gems to visit. With this video blog, Marronaia together with Paola’s Florence Tour hopes to introduce you a little bit to all the important spots you can’t miss while in Tuscany and specifically, in our Medieval Manhattan.

Piazza del Duomo is the heart of San Gimignano, the fulcrum of the town’s religious and political life. Together with Piazza Della Cisterna, it is located at the intersection of the Via Francigena and the ancient road that connected Siena to Pisa.
Piazza del Duomo has a trapezoidal shape and is made of bricks. Its current appearance took shape in the thirteenth century, during the economy’s golden period and the village’s political importance. 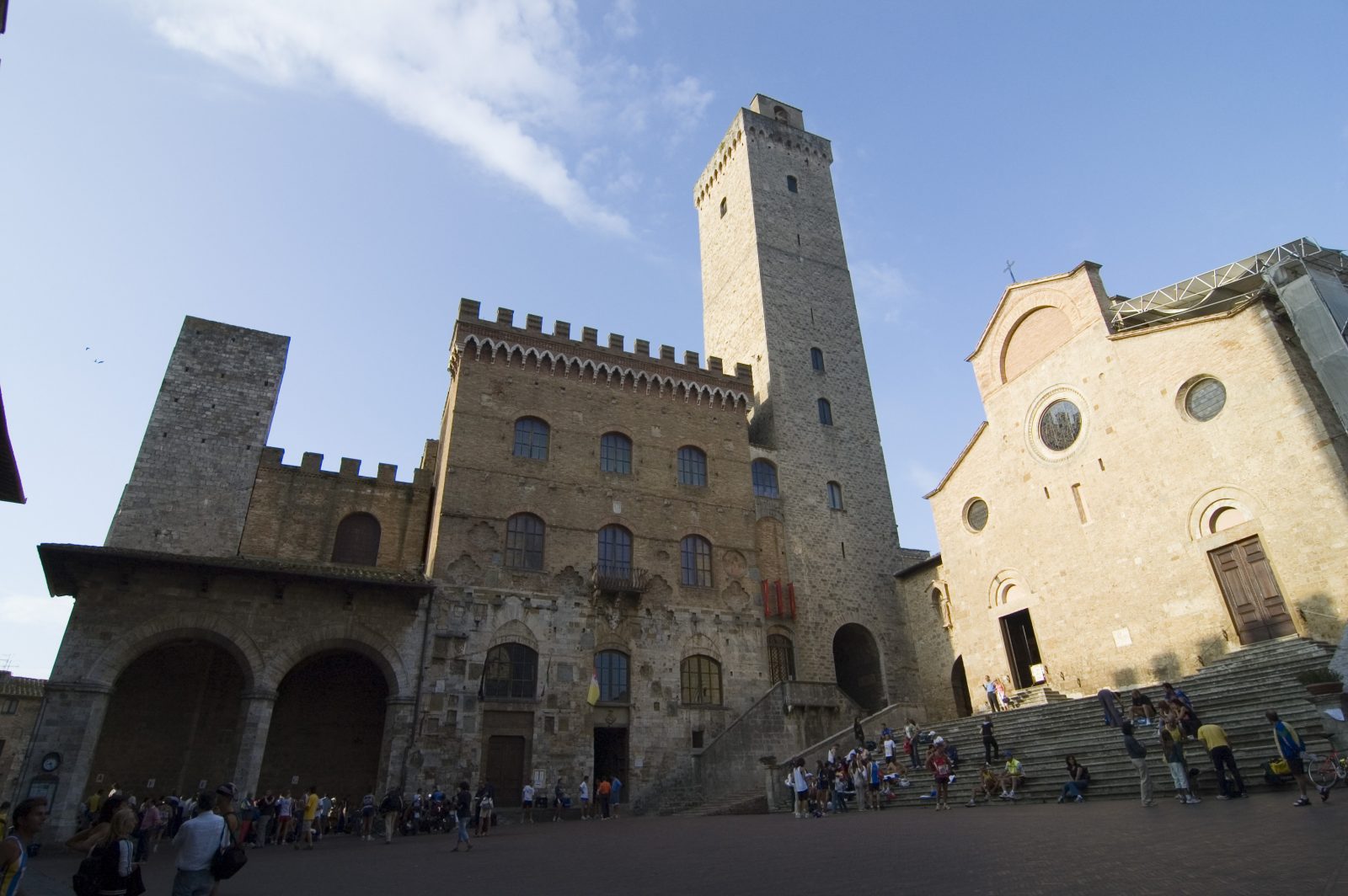 In this period, the main public buildings were built and the facade of the Duomo was rotated until it was facing the Palazzo Vecchio del Potestà.
There are the city’s most important buildings in this square: on the north side, the Salvucci Twin Towers stand out, soaring towards the sky. On the opposite side is the Palazzo Nuovo del Potestà with the loggia of the Municipality, and next to it is the massive Torre Grossa. 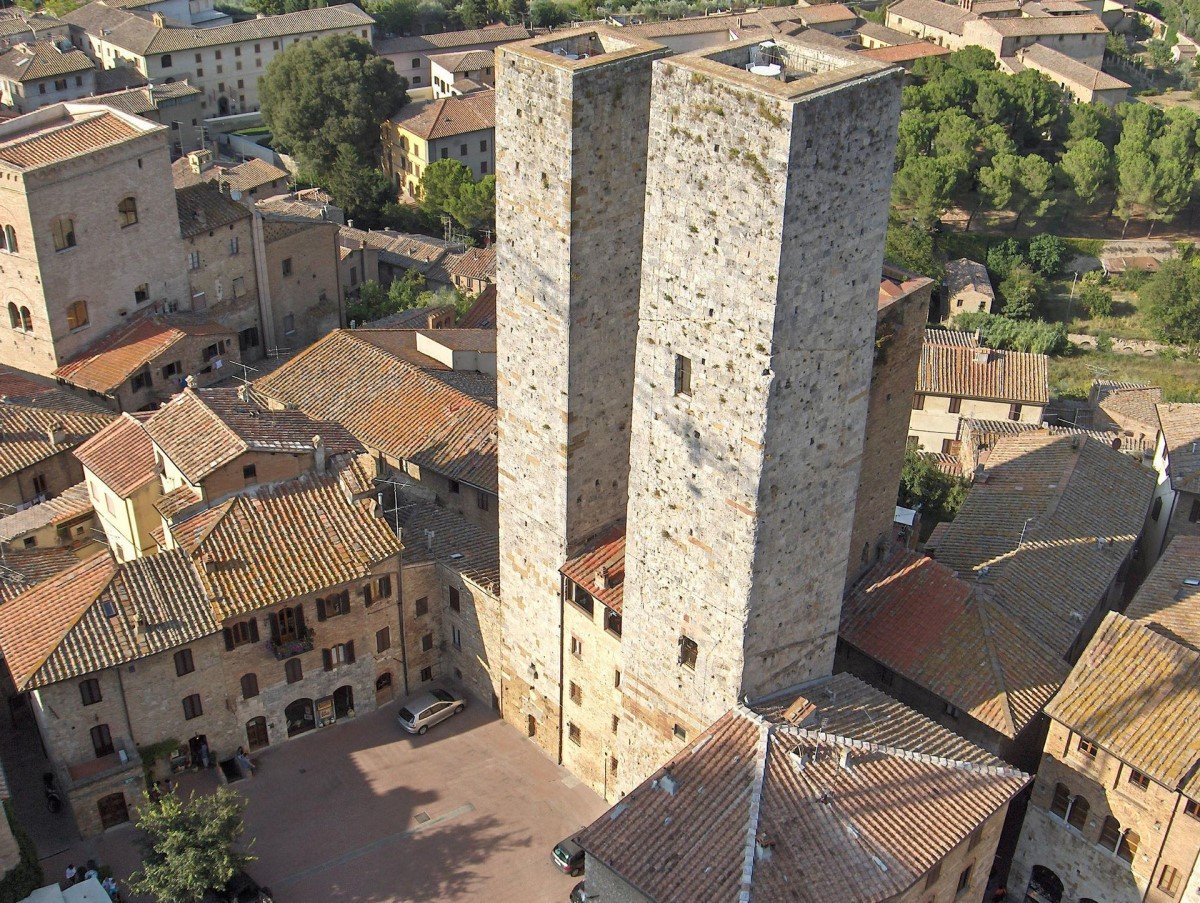 In the historic center of San Gimignano, the Torre Salvucci Maggiore is over 40 meters high and still retains its imposing appearance dating back to the 12th century. A precise conservative restoration has made the tower habitable, which today opens its doors to lovers of history and suggestive experiences. The ” house – tower ” is rented exclusively.

Inside, you live “vertically ” on 11 different floors (including the terrace) connected by an iron staircase with a handrail for 143 steps. The internal size is still the original (about 12 square meters per floor). The staircase crosses all levels (there are no passage doors), going up to the beautiful panoramic terrace on the top floor, complete with table and chairs: from here, the 360 ° view of San Gimignano is like a postcard.

The Baptistery of San Gimignano

The Loggia del Battistero is a Romanesque loggia that opens on the left side of the Collegiate Church of San Gimignano. It was closed in 1632 and transformed into the oratory of San Giovanni.

It was then used as a Baptistery, and the font was built in 1379 by Giovanni di Cecco and moved there, replacing the thirteenth-century one by Nicoletto da Poggibonsi. 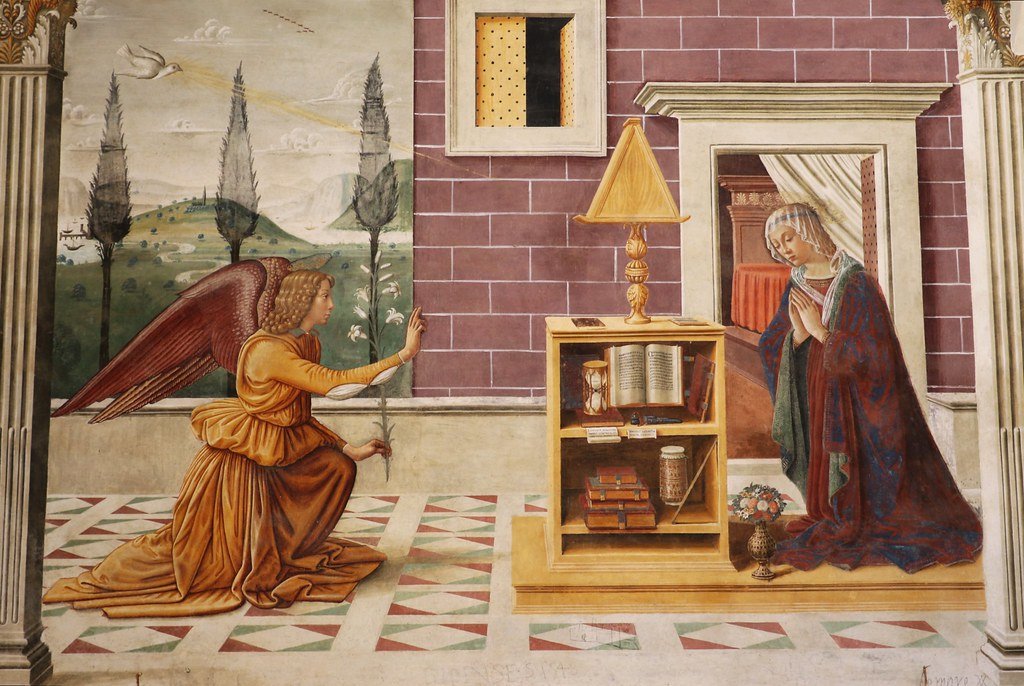 In relatively recent years the arches have been removed and the loggia has returned to open onto Piazza Pecori, making visible on the back wall the pleasant fresco of the Annunciation (1482), commissioned by Giuliano di Martino Cetti and attributed to Sebastiano Mainardi, among the most important painters in the workshop of Domenico Ghirlandaio. The Prophet frescoed on the vault above the Annunciation belongs to the author of the New Testament stories of the Collegiate Church. 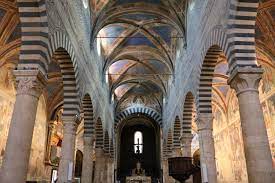 The Cathedral of San Gimignano is, without a doubt, one of the city’s most important monuments. The interior of this basilical-plan church is characterized by fourteen classical Tuscan stone columns, ten of which are round, the other four octagonal. The walls of the church are entirely lined with frescoes that recount Stories of the New and Old Testaments painted by illustrious artists of the fourteenth-century Sienese school.

The cycle of frescoes of the New Testament on the right wall is a masterpiece by Lippo and Federico Memmi. The Cathedral also holds a precious Renaissance jewel, the Chapel of Santa Fina, where three famous Florentine artists worked: an architect, Giuliano da Maiano, a sculptor, Benedetto da Maiano and a painter, Domenico Ghirlandaio.

This masterpiece is dedicated to San Gimignano’s best-loved saint. When just a girl, Fina contracted a severe illness and chose to spend the rest of her days lying on a wooden board that at the moment of her death burst into bloom with violets. Every year in March, the violets of Santa Fina blossom luxuriant amidst the hard stone towers that give this medieval city its famous profile.

The hill of Montestaffoli was, in the early Middle Ages, the seat of a fortress owned by the bishop of Volterra, who had political jurisdiction over the settlement. Here a market had been established that enjoyed a flourishing economy, thanks to trade with neighboring cities (San Gimignano was at the intersection of the Via Francigena, on the north-south axis, and the road connected Pisa with Siena). 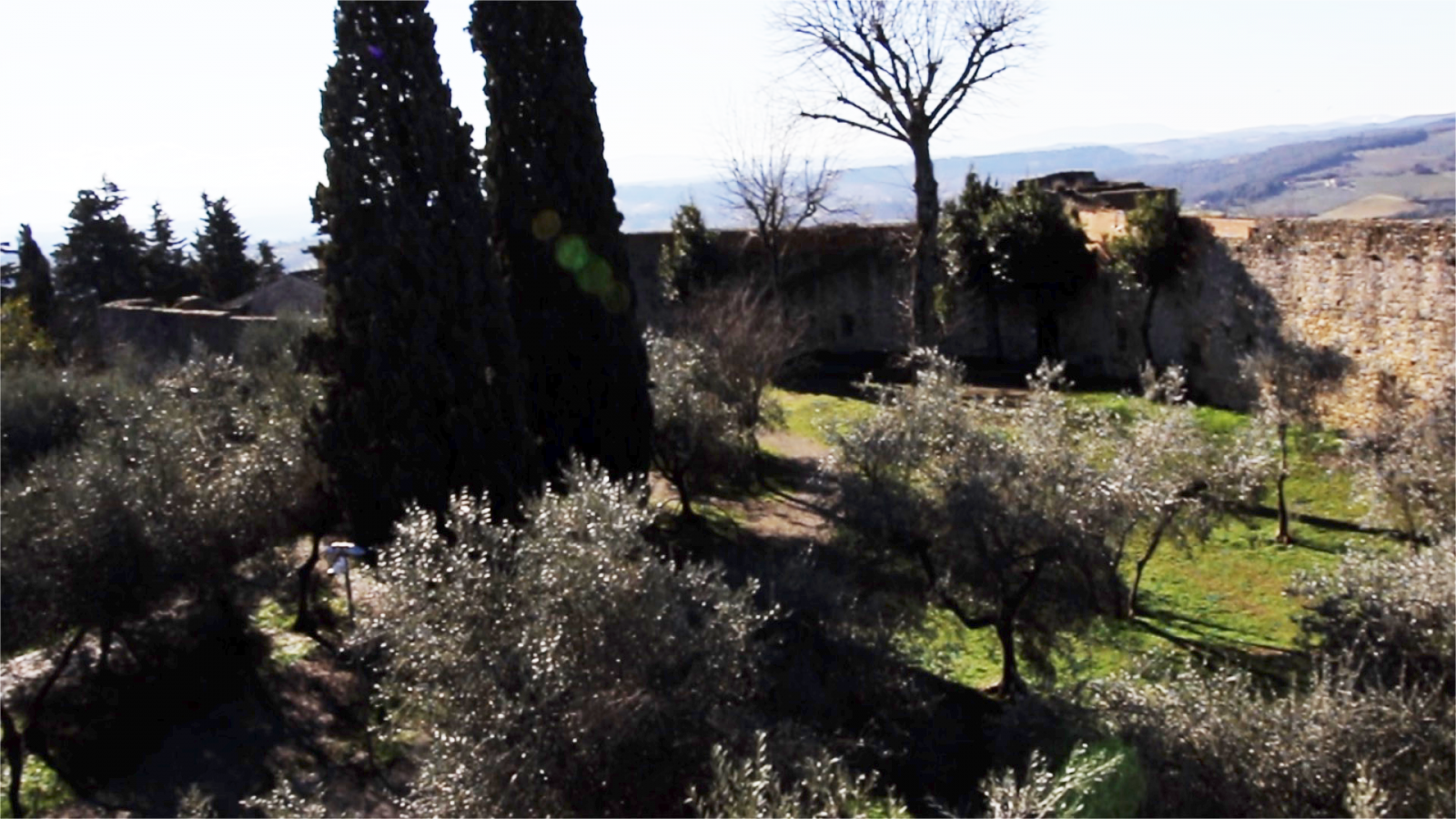 The Florentines took over the Rocca di Montestaffoli in 1353 after San Gimignano, devastated by a plague epidemic, asked for military protection in Florence. After a long period of neglect, it was partially restored in the last century, but only the external walls remain of the original structure. In his court, green space was created where public events were organized. From its only accessible tower, you can enjoy a beautiful view over the Valdelsa and the village’s historic center. 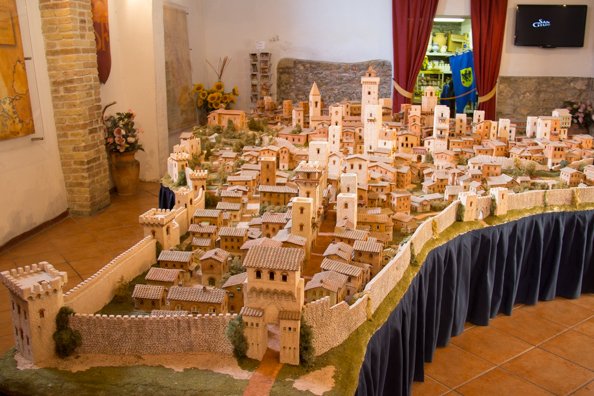 SanGimignano1300 is a museum, an exhibition, and a journey through time. It is art, history, and research. It is a magical vision of towers, squares, palaces, shops, and people. The desire to enhance this incredible medieval city is a living testimony of tradition, culture, and civilization.
San Gimignano 1300 is dedicated to San Gimignano and its inhabitants, to Tuscany, to Unesco, to all its friends in the world, and above all to those who always look upwards.
The Museum was inaugurated in February 2010, and it’s an impressive 1: 100 scale reproduction of the city of San Gimignano in 1300, entirely handmade in ceramic.

The Sala del Consiglio (Council Room), also known as the Sala Dante, so-called recollection of the Florentine poet’s visit in 1299 as the ambassador of the Guelph League.
The room exhibits a famous, late thirteenth-century fresco cycle (1290 circa) depicting tournaments of knights and hunting scenes dedicated to Charles of Anjou who is depicted enthroned on the wall opposite the entrance, as several personages render homage to him with the gift of a falcon. 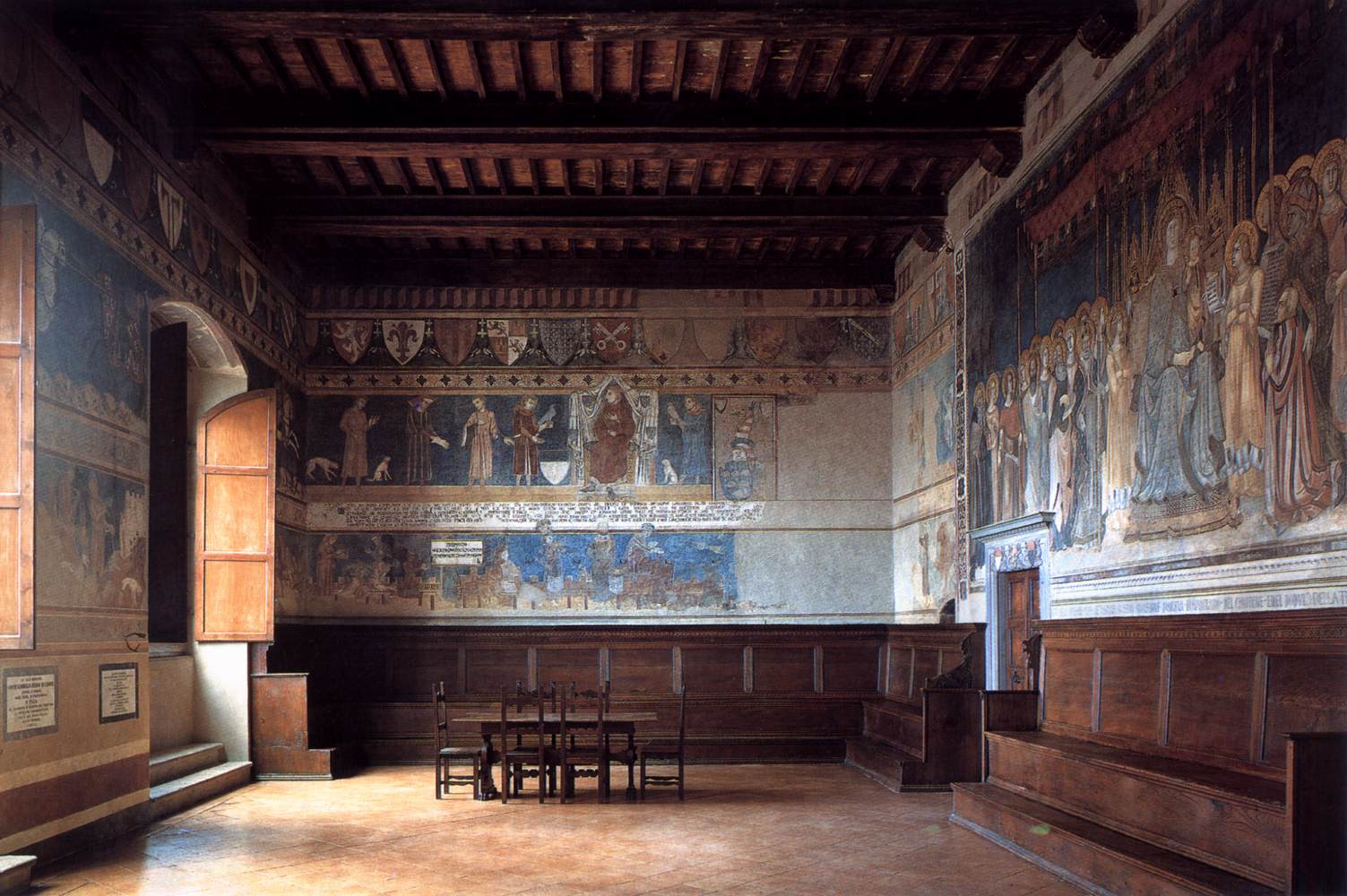 The paintings are attributed to Florentine painter Azzo di Masetto. On the right wall is the Madonna in Maestà that Lippo Memmi painted in 1317. A painter of the Sienese school, Lippo Memmi was a follower of Simone Martini and was active during the first half of the XIV century.

The fresco was indeed inspired by the Maestà Simone Martini had been painted in the Palazzo Pubblico of Siena two years earlier, that is in the year 1315. The second floor is the location of the Chamber of the Podestà, the title of a high official in many Italian cities beginning in the late Middle Ages.

The room is entirely frescoed with a unique narration presenting love scenes, in addition to a series of moral exempla addressed to the Podestà who is entreated not to give in to corruption. Executed in the early 1330s, the frescoes are attributed to Memmo di Filippuccio, the father of Lippo Memmi. 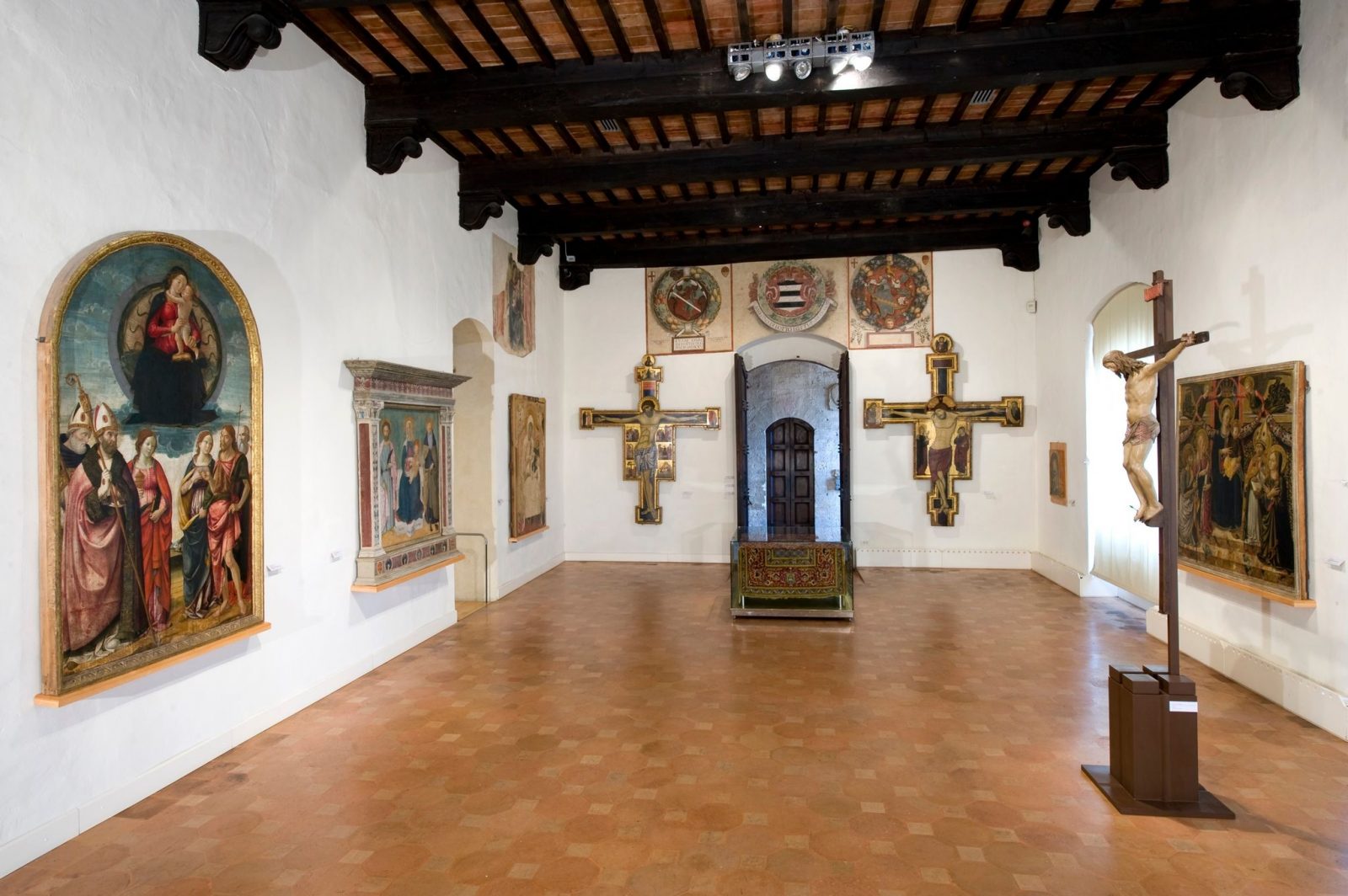 The second floor of the Palace is the location of the Pinacoteca, a picture gallery that offers an exquisite artistic itinerary characterized by the extraordinary presence of Sienese and Florentine painters who, from the XIII century through the XV century, succeeded one another in creating works of art of inestimable value. Among the greatest artists, let us cite Filippino Lippi who authored a pair of tondos depicting the Annunciation, Benozzo Gozzoli, Benedetto da Maiano and Pinturicchio.

FAI – Torre e Casa Campatelli is a fantastic old tower, typical of San Gimignano, with a magnificent historical house inside!
Of the 72 ancient towers that made SanGimignano famous, only 14 have survived to the present day. Yet, thanks to them, we can still marvel at the unmistakable silhouette of what is the most famous Italian medieval village of all. The remaining towers include the one that belonged to the Campatellis, a family of Florentine entrepreneurs and landowners. 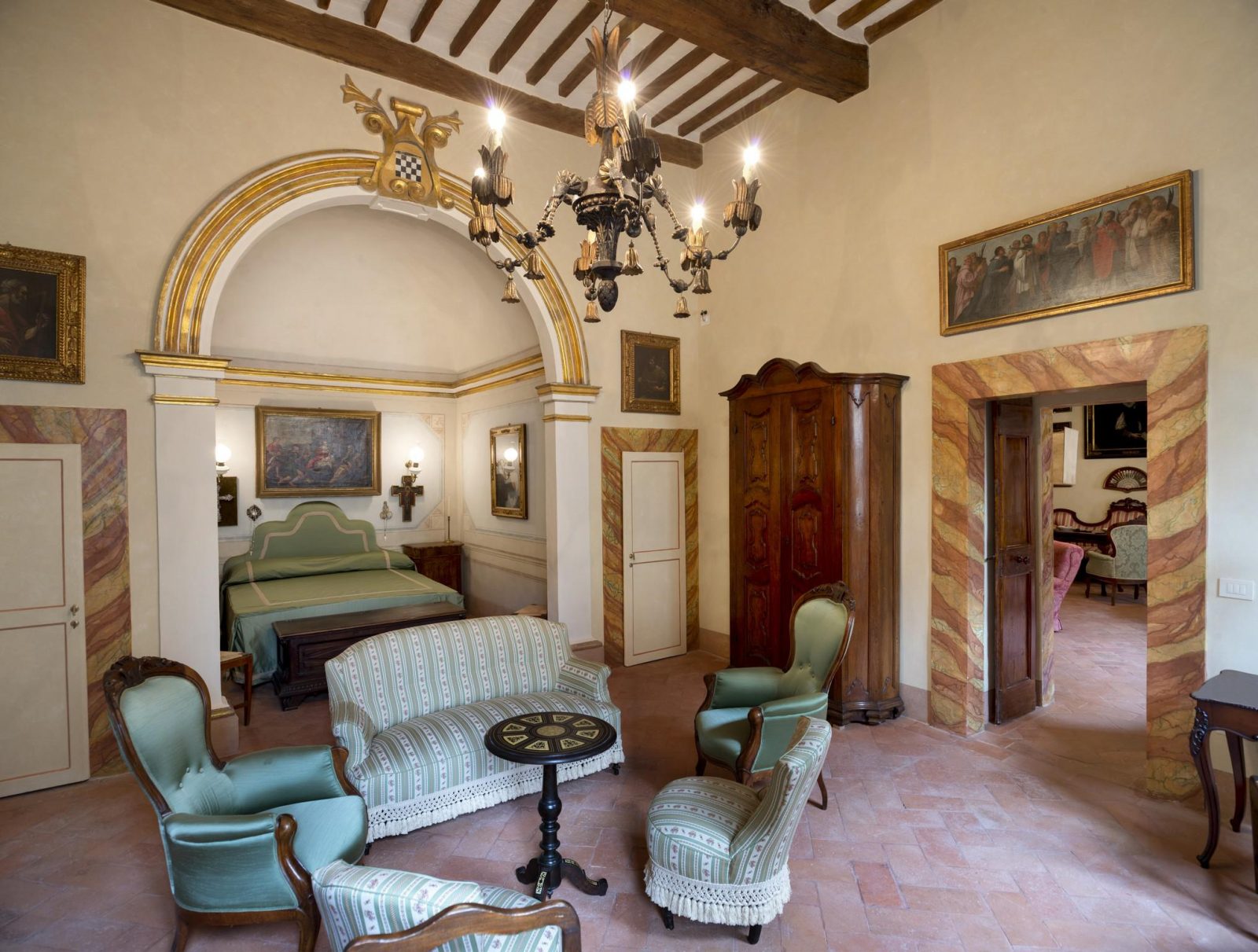 They associated their name from the early 19th century with the 28-meter-high tower-house erected in the mid-12th century. Today this is the only tower that has retained the original single volume of the construction, being completely hollow inside.
The family purchased the entire complex and turned it into an Haute bourgeoisie residence that reached us intact, in terms of its appearance and atmosphere, thanks to Lydia Campatelli, who in 2005 left the Torre Casa Campatelli to FAI on the condition that it would be opened up to the public. As a result, the residence is rich in narratives, ranging from the history of the medieval city to the vicissitudes of a wealthy family and offering, in the process, a vivid encapsulation of middle-class life in Tuscany in the period straddling the 19th and 20th centuries, caught between tradition and modernity.
The visitor experience begins with an evocative video projected onto the attic walls that covers the history, identity, and legends of San Gimignano, which is now a UNESCO World Heritage Site. Then, on the piano nobile, furnished with original pieces that have been complemented with great care, we enter the daily life of the owners of the house: a world suspended in the past, amid photographs, private memories, objets d’art and collections, including Montelupo pottery and paintings by Guido Peyron – a renowned Florentine artist who was also Lidya’s uncle.
A visit to the Campatelli Tower-House is a bona fide journey back in time, set against more than 1000 years of history. 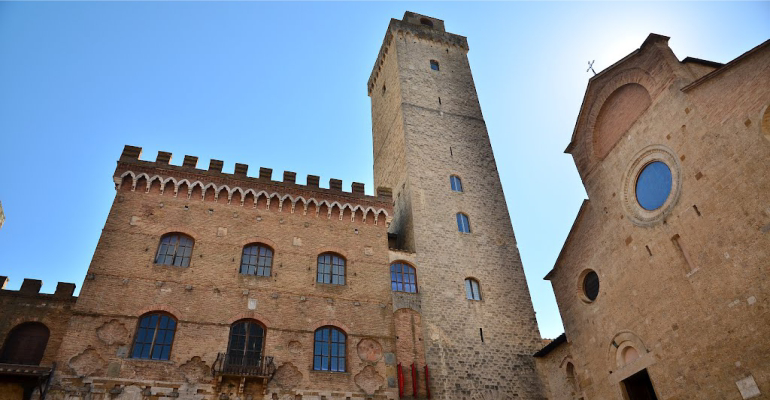 The construction of the Torre Grossa started on August 21, 1300, four months after Dante Alighieri visited the city. Municipal authorities wanted to enrich San Gimignano with a tower that would become the city’s symbol.
The building fulfilled a military function, like a watchtower, and a civil one as a bell tower. The tower’s walls are two meters thick and carved in regular bricks. After climbing the tower’s 218 steps, visitors will have panoramic views of the city.
Admire the city landscape with roofs, squares, alleys, and palaces. Also seen in the distance: are the woods of Poggio del comune, the white peaks of Alpi Apuane, the delicate colors of Chianti vineyards, and the gentle hills of Casentino and Pratomagno.