Amphora Wine – It is not a fad, nor a trend, but rather an ancient tradition that is still in practice in some parts of the world.

In a heterogeneous landscape of thriving wine production, we find companies committed to making informed choices for the creation of one of the most beloved products in the world. The Italian territory, known for its oenological excellence, is taking bold steps towards higher quality and wider variety.

Vinification in amphorae has its roots in our ancient culture, such as Greek and Roman civilizations, but looking further back in time, we find that the Ancient Egyptians were already making use of this method. These extraordinary containers were made of terracotta, a material so closely bound to both earth and man that the ancient Greeks believed Prometheus used it to create us.

Its use for conservation was widespread in civilizations worldwide, and to this day, among its many purposes, terracotta is still used to make sturdy containers and bowls. 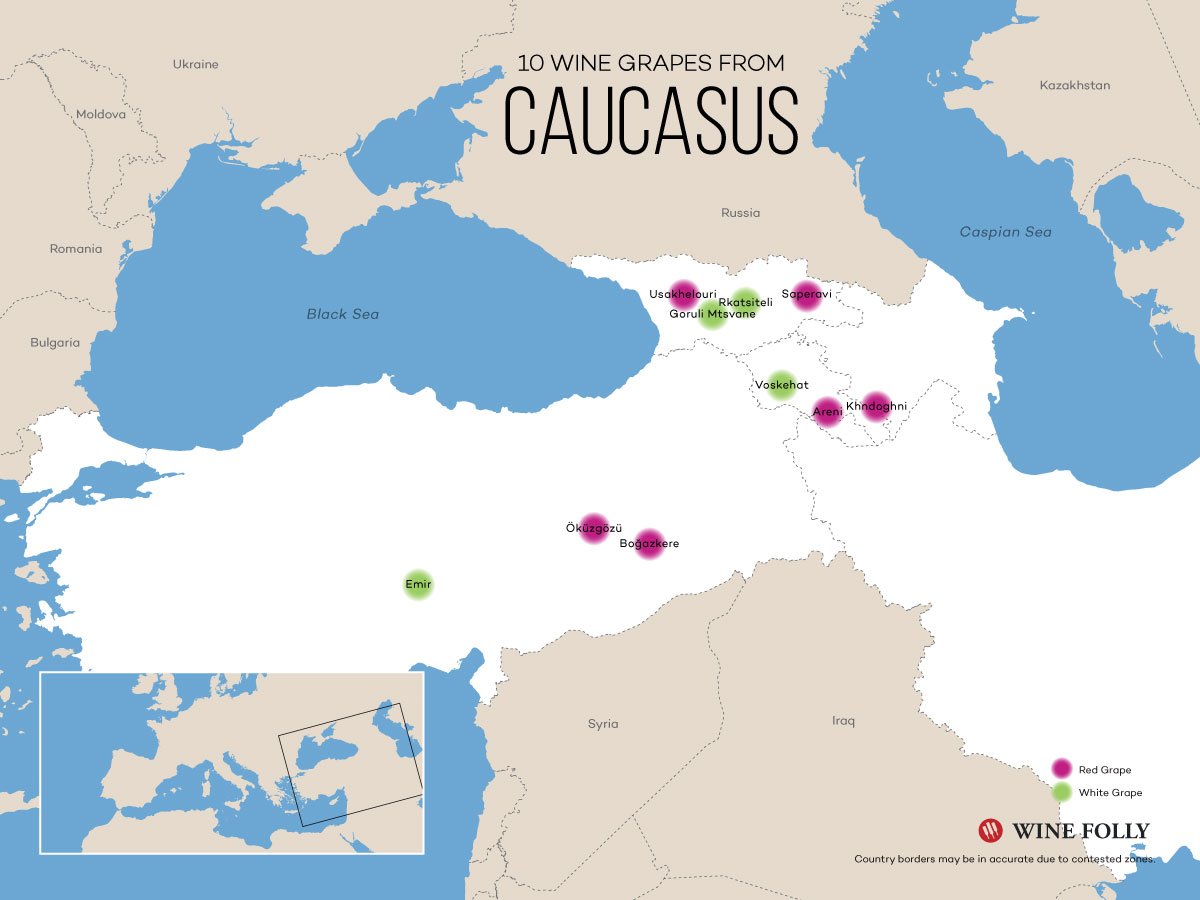 In Italy winemaking in amphora is relatively new. In Georgia however, especially in the eastern region of the Caucasian plain, this method has been handed down over the millennia. On the border between East and West, Georgia was one of the most important areas in which the union between wine production and terracotta was solidified.


In two Neolithic archaeological sites just south of the capital Tbilisi, ceramic fragments containing chemical traces of wine were found, dating back 8 thousand years.Here, the farmers used to store the wine in large ceramic containers called Kvevri, and bury them deep in the ground to protect against raids.The practice, making a virtue of necessity, defined a precise method of amphora wine production.Unlike the amphorae we are more familiar with, these do not have handles as they were not meant to be transported but buried.


But how is wine brewed in a container made of terracotta?

Let’s delve into the details.

According to Georgian tradition, after a light pressing the grapes are inserted into the Kvrevri (ქვევრი) which have been coated with a layer of beeswax to insulate them, and fermentation begins spontaneously.

In this phase, which lasts approximately 10 days, the container remains open to allow carbon dioxide to escape and to allow for manual fulling: the process by which the marc is pushed down and the compact mass (cap) that has collected on the surface is broken. 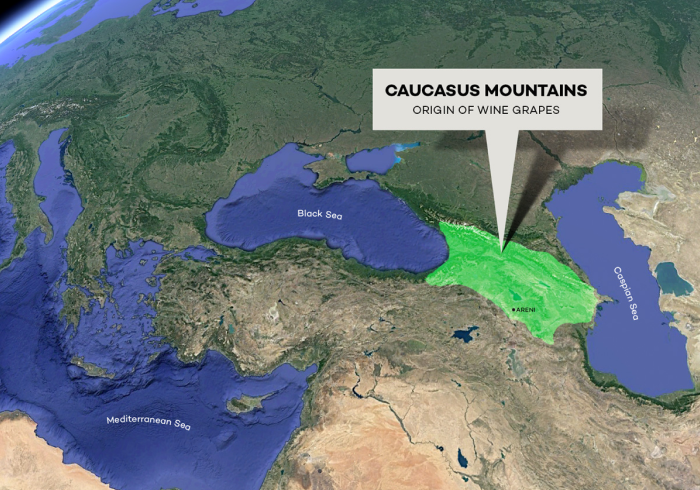 Since the amphorae are buried, the temperature does not need to be controlled, as the fresh soil keeps them cool.

At the end of the fermentation process, the Kvevri are filled to the brim with wine and must, and then closed with a lid until the secondary (malolactic) fermentation is also complete.

This process has been successfully yielding Georgian wine for millennia, and the production of terracotta developed alongside it. According to the BBC, the oldest amphora in the world dates back 8000 years. This skill has been passed down through the generations, allowing craftsmen to make these large containers, with a capacity ranging from 100 to 4000 liters. 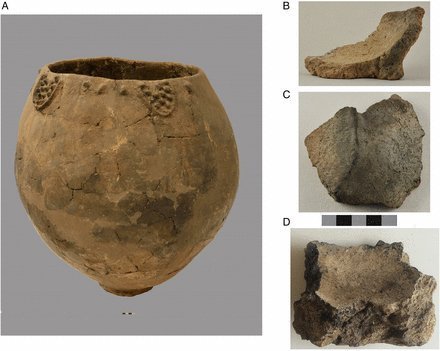 These noble traditions, winemaking, and pottery demonstrate a deep authentic relationship with the region that must not be lost. Thus, in 2013 the production of wine in Kvevri was recognized by UNESCO as an Intangible Cultural Heritage.

But what about Italy?

As mentioned above, conservation in amphora is an ancient method for our country, too. However, this tradition was lost over the centuries, as wooden barrels slowly began to replace terracotta containers.

Archaeological digs in Greece and Crete, dating back to the third millennium BC, uncovered evidence of wine settlements containing Pithos: large ceramic amphorae with dozens of hectoliters of capacity.

The domestication of wild vines in our territory took place a millennium later, in the current region of Ischia and the Tyrrhenian coast, thanks to the influence of the Ancient Mycenaeans. Pithos and wine-amphorae were found on the island of Ischia, dating back to the seventh century BC.

In addition to these two types of containers, we also have the Dolium: an amphora largely used in the western part of the Mediterranean, and later also in Italy, Gaul, and Spain. Local evidence of this is found in some ancient Roman villas, where the Dolia were buried 3/4 of the way down, similarly to what we have already seen in the case of the Georgian Kvevri. 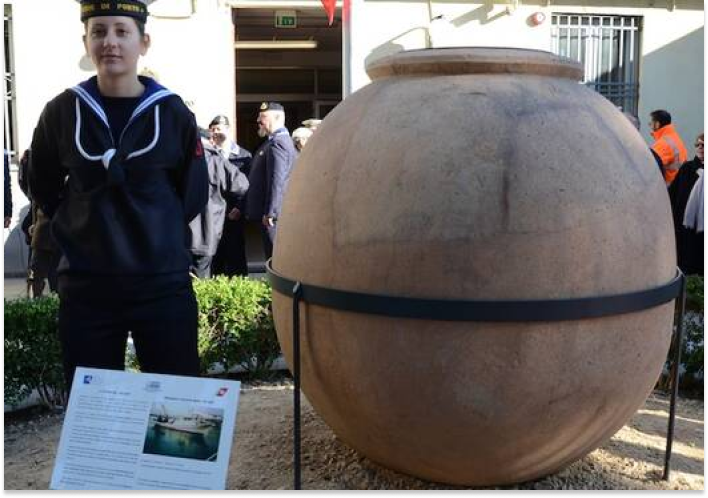 The internal part of the containers was coated with a layer of tar pitch to make them waterproof. Despite its useful water-repellent and antifungal properties, pitch gave a particularly pungent flavor to the wine, so much so that even some Latin writers such as Pliny and Columella noted a greater enjoyment in drinking those wines aged in the Dolia not treated with natural tar.

Despite its widespread use, the tradition of winemaking in terracotta, both in Italy and in the rest of Europe (not counting a few traditions carried on by the Spaniards), was gradually abandoned. By the time the Roman Empire had fallen, the amphorae had been entirely replaced by wooden barrels.

We need this historical evidence to understand the origins of an ancient method, as Italian producers and consumers have begun taking an interest in this alternative to standard brewing.

The Rediscovery of the Amphora Method

In our Bel Paese, the pioneer of wine production in amphora is certainly Francesco Gravner; a Friulian winemaker known all over the world for his “orange wines”.

For years, subject to both controversy and appreciation by the greatest wine experts, Gravner’s role has certainly been crucial.

There is no sudden decision to switch from one production method to another. It is a choice that gradually matures, developed, and perfected with patience and dedication.

The starting point is an ancient tradition; the premise and foundation of a new present facing the future. 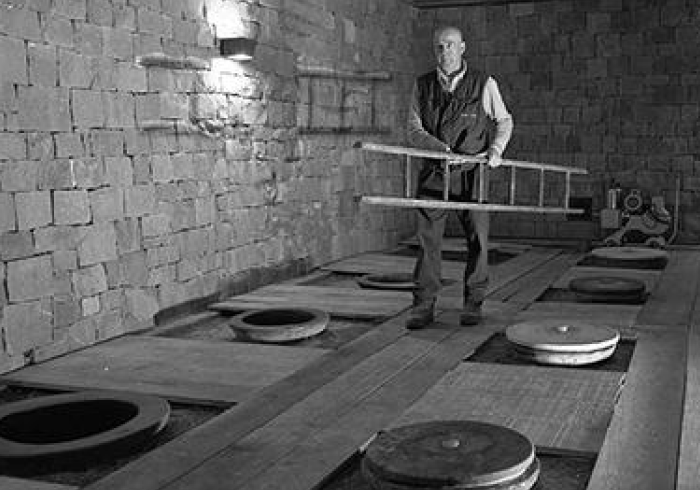 A journey aimed at questioning new technological knowledge in favor of distant, but valid crafts and methods, nonetheless. A journey that for Francesco begins in Georgia, where time and progress seem not to have affected the passing on of knowledge and flavors.

Georgian Kvevri, of which he owns forty, is very much central to production in his company.

We at La Marronaia have also embarked on this journey aimed at returning to our origins. The use of the wine amphora, inside our cellar, has already allowed us to measure ourselves with this ancient and yet revolutionary practice.

We consciously choose to allow nature to take its course, following the conditions dictated by the environment, that we have learned to harness without distorting its complex characteristics. 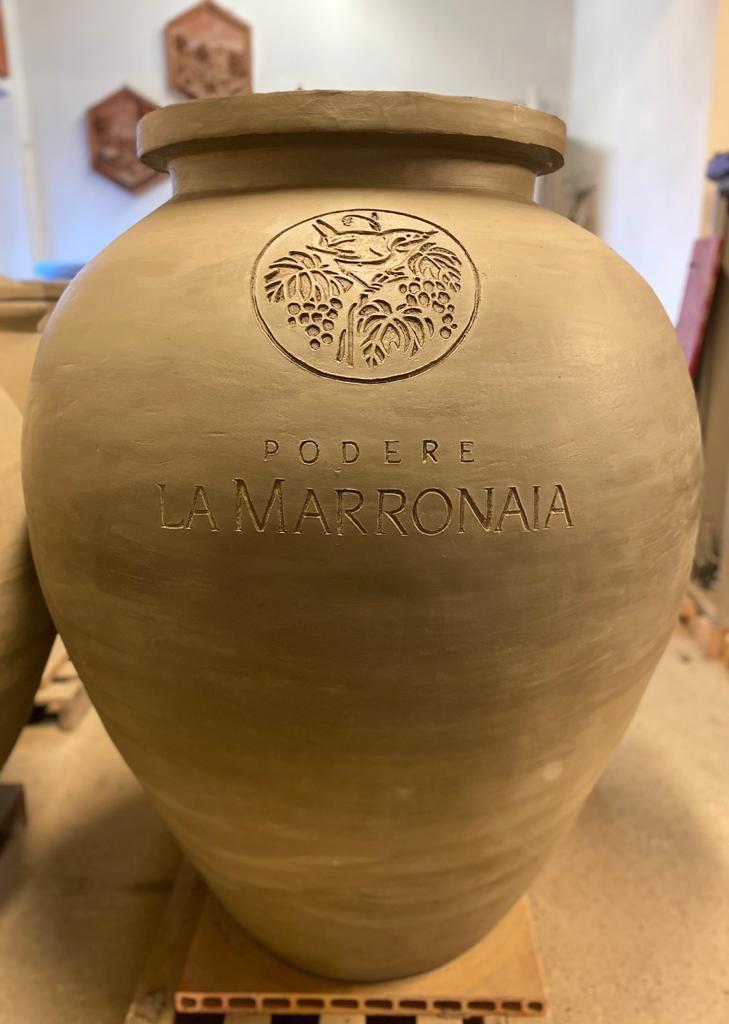 This implies adopting the principles of biodynamic agriculture; a practice founded in the 1920s by the Austrian philosopher Rudolf Steiner.

Responding to the current problems caused by the use of chemicals, this cultivation method relies on a holistic relationship between man-earth-cosmos.

Biodynamics protects the ecosystem and biodiversity, which are the resources for cultivation, without relying on synthetic chemicals.

The amphora, by its very nature, reconnects to those energetic forces studied by the biodynamic system. Its oval shape and its underground position are reminiscent of the maternal womb. Hardly a coincidence, if we think that this is where the wine grows and matures.

Each method must follow specific rules, and one of the most important for biodynamic viticulture is to take care of the vineyards, otherwise, the natural treatments used to feed the soil will be less effective.

If you would like to know more, please refer to this brief yet comprehensive article. 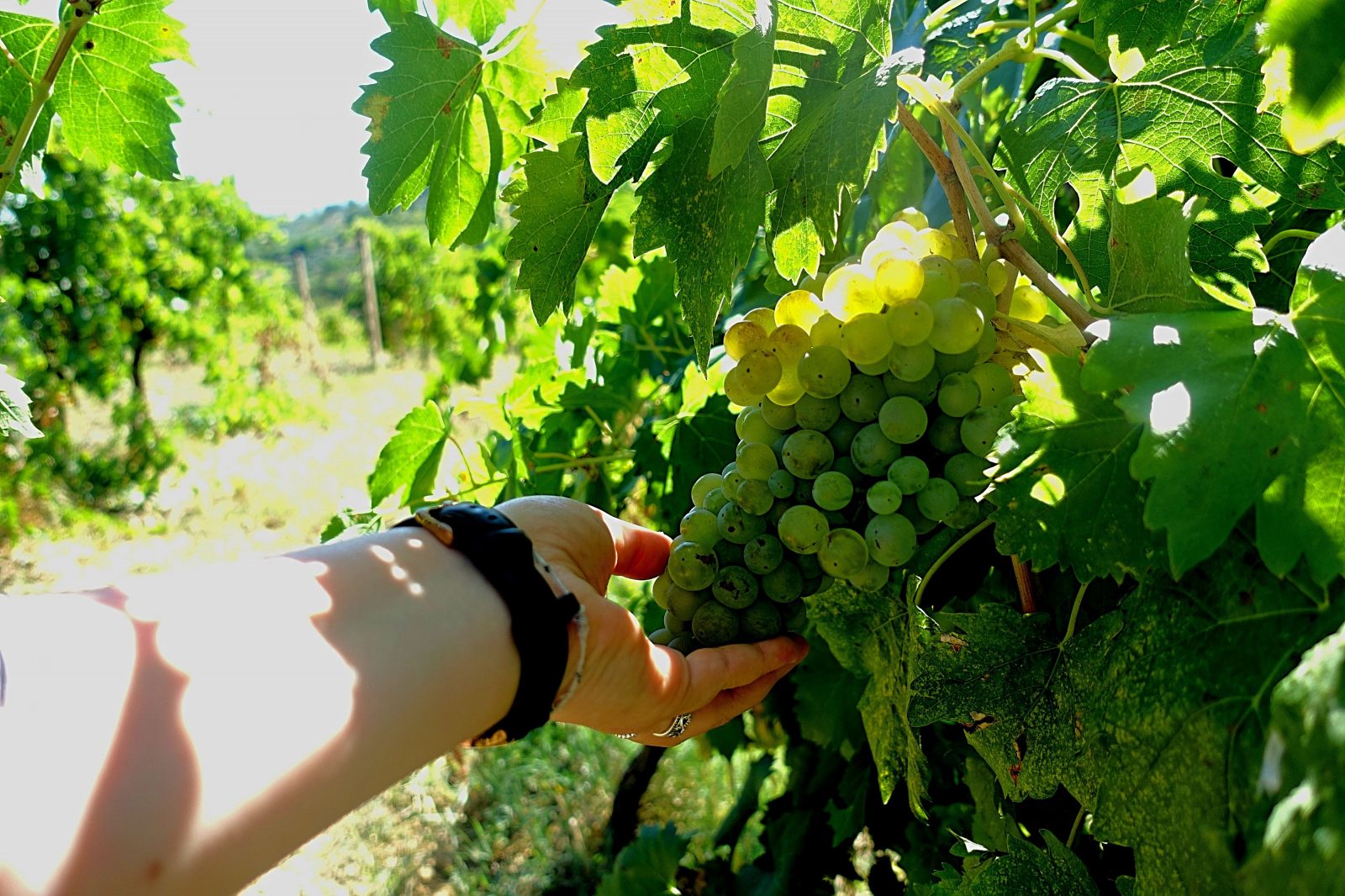 To meet the biodynamics requirements established by the Demeter brand, a wine does not necessarily have to be aged in amphorae. Even today, most of the production follows the classic barrel aging. But if winemaking in terracotta is still perceived by many as a radical and unnecessary choice, its advantages are numerous.

The durability of the amphorae, compared to wood or steel barrels, make them an environmentally and financially advantageous choice. On average the wood must be replaced every 4-5 years, the ceramic instead can last decades if not centuries.

Moreover, unlike barrels and “barriques”, terracotta does not release any type of scent or aroma, allowing the grape to retain its natural flavors. Thus, the wine can best express all the characteristics of the specific variety used.

We at La Marronaia adopted the biodynamic method a few years ago (link to the article that talks about the adoption of biodynamic agriculture). After the transition to organic farming, this represented an additional challenge that we faced by placing nature and its perfect mechanisms at the core.

The result? An amphora wine rich in enzymes and with an enveloping aroma.

Thanks to a greater environmental sensibility and a newfound understanding of the region, the amphora winemaking method associated with biodynamic viticulture is progressively increasing. Beyond the economic advantages and precise stylistic research of taste and flavor, the return to ancient methods with modern knowledge represents the only way forward if we wish to restore the correct balance between man and nature.

A balance that has never failed in Podere La Marronaia, and which is reflected in all our choices. Starting from products such as the “Raggio d’Anfora“; an IGT white wine obtained from local and indigenous grape varieties grown in our vineyards with the biodynamic method. 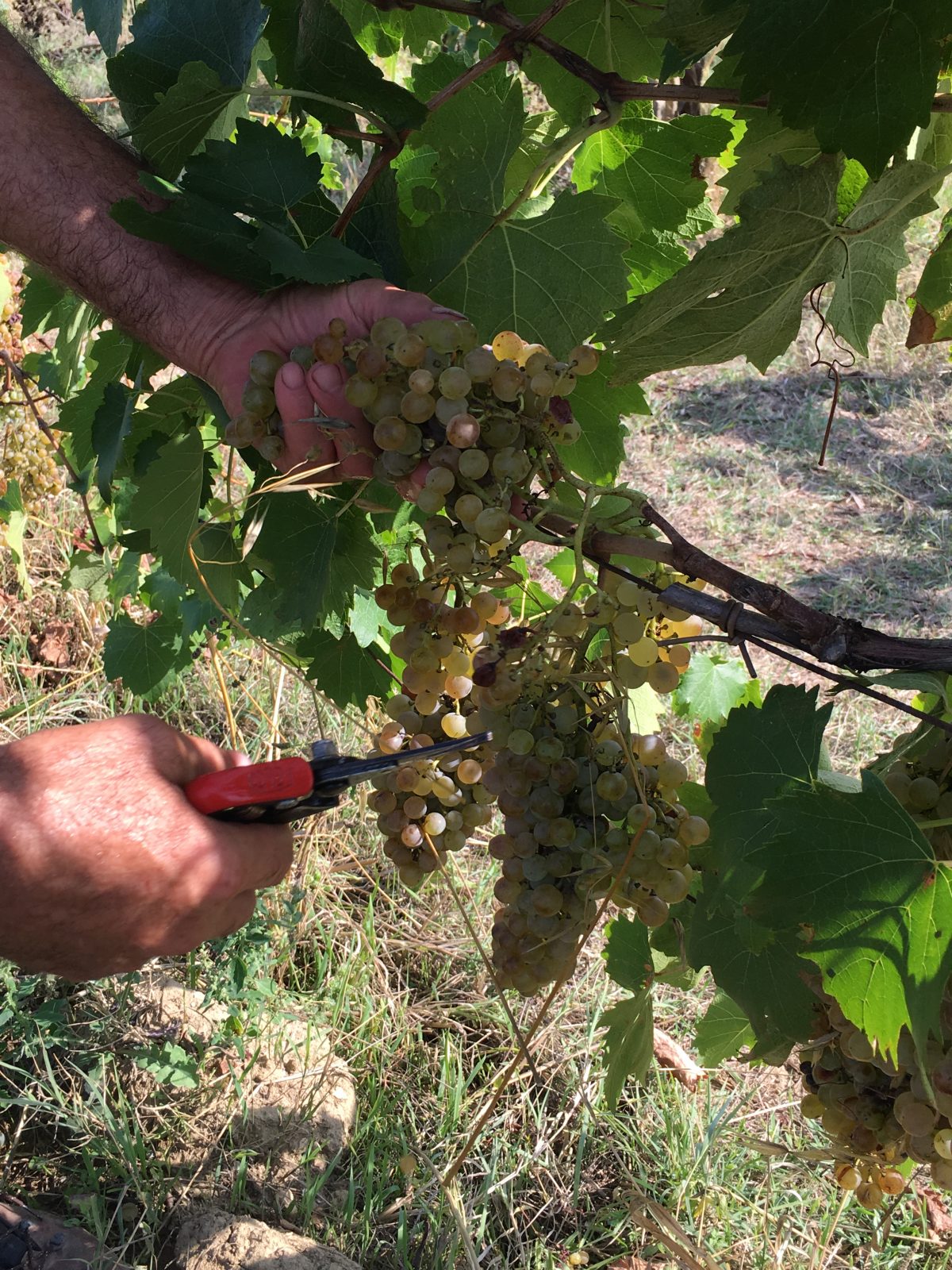 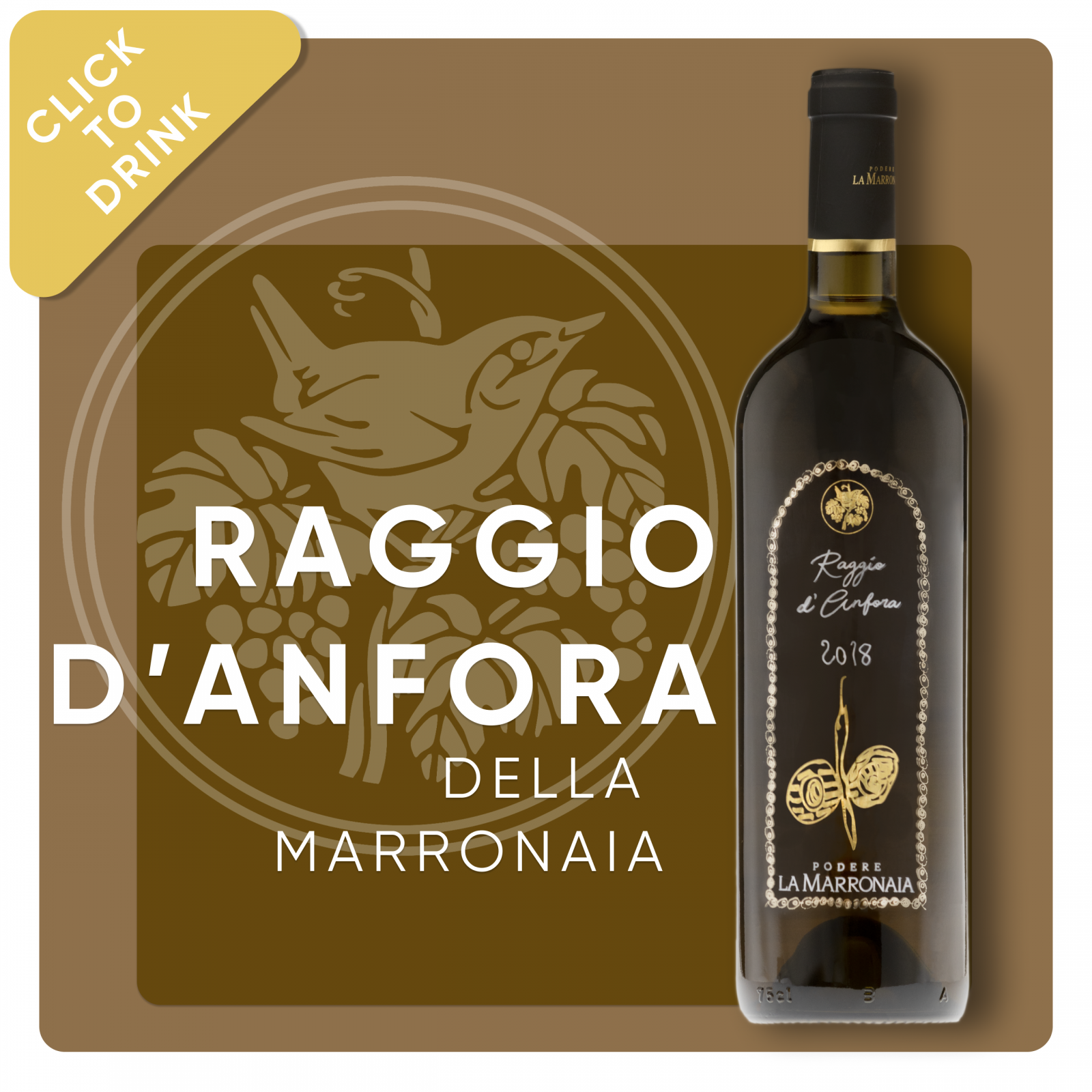