The “cow horn 500”, which is also known as “preparation 500”, is one of the best known and most widespread preparations of biodynamic agriculture based on the anthropological, spiritual vision of the world developed by Rudolf Steiner, Austrian philosopher, and esotericist who lived between 1861 and 1925. However, it was Steiner himself, in his fourth lesson, who described why to use the horns of cows that have given birth at least once:

“The cow has horns to send within itself the etheric-astral productive forces, which, by pressing inward, have the purpose of penetrating directly into the digestive organ. It is precisely through the radiation from horns and hooves that a lot of work develops within the digestive organ itself. […] So in the horns, we have something well-adapted, by its nature, to radiate the vital and astral properties in the inner life. “

It is also called “preparation 500” because this is how it was renamed about three years after Steiner’s death, in 1928, adding the number that indicates the experimental particle that distinguishes it. Steiner believed that the forces that penetrate the digestive organ of the cows through the horn influence the composition of the manure. When this is returned to the environment, it is enriched with spiritual forces that make the soil more fertile and positively affect it. So on the growth of crops, from sowing to harvesting.

The horns must be filled with cow manure and then buried throughout the cold season, i.e., six months. In this way, the mixture will ferment, and by Easter, it will be a sort of humus. It will have lost the foul smell of the manure and will have taken on a scent of undergrowth. At this point, the horn can be used to increase the yield of the soil. We have to mix it, dilute it with water, distribute it on the ground, spray it.

There are two formulations of the cow horn 500:

– classic: we use 200-300 grams per hectare. It has mainly a revitalizing function;

– composted: called 500k or 500p, it is prepared with half doses and then recomposed with the heap preparations. It allows you to create a unique substance that enhances the transformation of organic matter.

Thanks to the increase in the concentration of humus that occurs with cow horns, the microbial activity of the soil is enhanced, and thus its structure and pH are improved. In this way, the ground will be more resistant to drought and offer the best conditions for developing plants and their roots. The horn-filled with manure must be buried about 80 cm deep in a fertile and well-exposed area. If it rains, it is recommended to protect it with a biodegradable cloth. After about six months, the volume of manure will be significantly reduced. It can be stored in a copper box and placed inside another giant solid wood box. The containers should be placed in a dry, dark, and well-ventilated 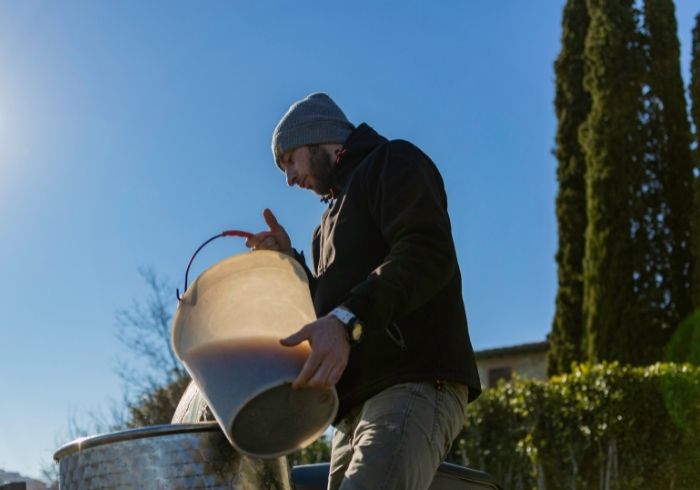 The dynamization of the 500 preparation must be done in the afternoon, using rainwater preferably, but not stagnant, at a temperature of 30-40 ° C. This operation must be done in the afternoon and involves mixing a small amount of mixture with a large amount of water, in proportion to 60 liters of water for 250 grams of compound. You have to alternate energetic mixing for about an hour, first in one direction and then in the opposite one, creating deep vortices. The dynamization can be done by hand, using a stick or a specific machine ( “dinamizzatore” ).

Before sowing and after mowing, the preparation should be used at the beginning of the vegetative cycle to wet the seeds and roots. The Cow Horn 500 is not complete organic fertilization, but it is complementary and serves to revitalize the soil.