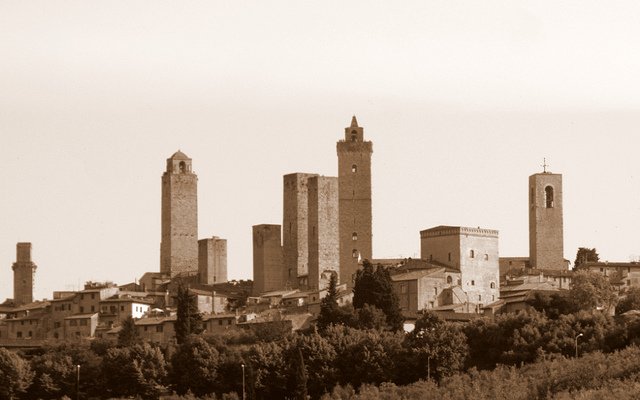 When you arrive in San Gimignano there’s a thing that mainly stands out…. Towers everywhere!
Let’s see why San Gimignano is plenty of these buildings…
During the Middle Ages the towers in San Gimignano were 70; now we can see just 13 of them.
The towers were, for sure, a symbol of prestige ( the highest were your tower, the more important were your family), anyway these building had also others funtcions. The most important was the defensive one. The towers were linked by bridges, this way residents could pass from a tower to another one without using dangerous roads.
Another reason of their diffusion seems to be linked to the textile industry, in fact in these buildings were used saffron pigments to color clothes. To fix the color the clothes had to be protected from sun and dust, so the towers were the perfect place to hang out them. 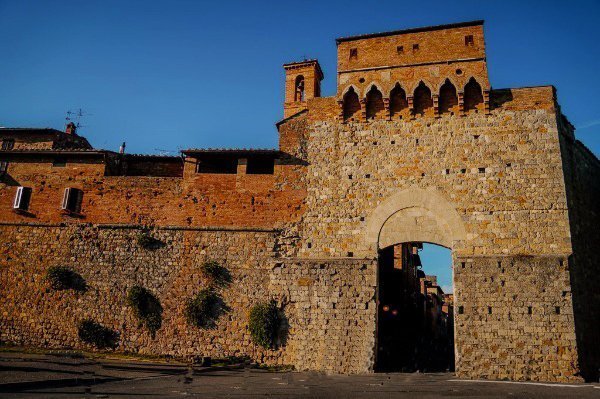 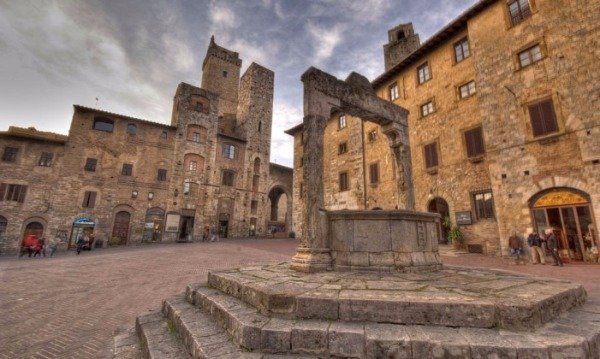 The square takes the name from the octagonal well that is located in the center, and it was built thanks to the Podestà ( municipal authority) Guccio dei Malavolti, whose emblem (a stair) was graven on the well’s rock. Cistern Square has always been the “business” square because here were located all the shops and here took place markets and jousts. On the other side of it you can find the “Torre del Diavolo” ( Devil’s Tower), known with this name because of its history. The owner of the tower after a long trip, found it a little bit higher than before. He though that the guilty was the devil. 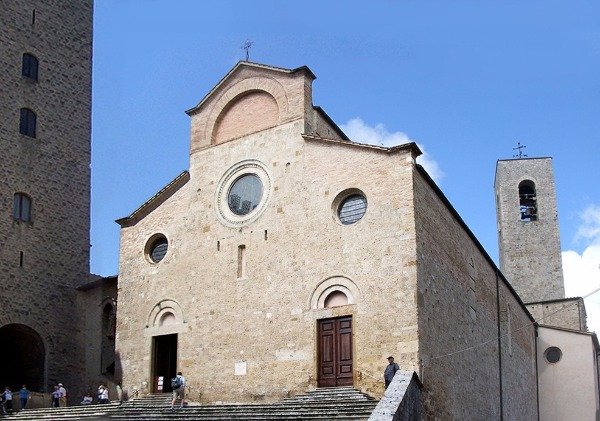 It was consecrated in 1148, it’s divided in three naves and adorned with valuable Sienese School frescoes: “The Old and the New Testament” (Bartolo di Fredi and the “Bottega dei Memmi” or Barna da Siena); “The Last Judgement” (Taddeo di Bartolo) works of art by the Florentine school: “Stories of St. Fina” (Ghirlandaio), “St. Sebastiano” (Benozzo Gozzoli), wooden statues (Jacopo della Quercia) and the Sculptures (Giuliano and Benedetto da Maiano). Frescoes, statues and sculptures make the Collegiate Church of San Gimignano a very prestigious museum. The façade is in Roman style, so very simple and austere. 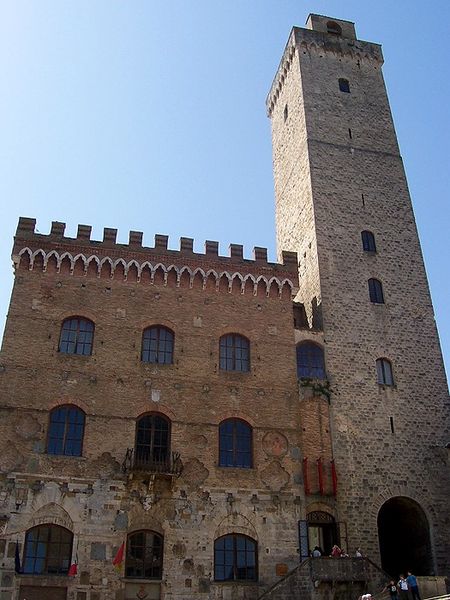 It was built and expanded between 1288 and 1323, it’s another late-medieval architecture masterpiece. The “Torre Grossa”, 54 meters high dominate the Palace and you can visit it through the “Museo Civico”. The Tower has a majestic appearance and an unequivocal military function. It’s symbol of community and laical power, and overlook all the town as well as the surrounding countryside. 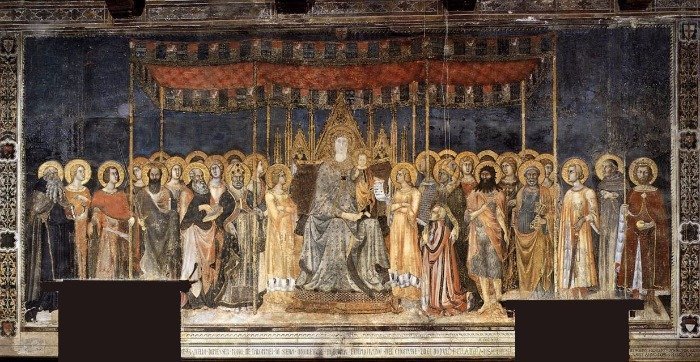 The “Museo Civico”  is located inside the People’s Palace, and its beauty start from the courtyard where you can find a marvelous cistern from 1361 and Sodoma’s frescos. After the staircase you will enter in Dante’s room, named like this in honor of this great poet that stayed in San Gimignano to help a big Guelfa league. From the Museo Civico you can also enter the “Torre Grossa” and you can also access inside the “Pinacoteca” ( art gallery) that contains  works by Filippino Lippi, Pinturicchio, Benozzo Gozzoli, Domenico di Michelino, P.F.Fiorentino, Sebastiano Mainardi, Lorenzo di Niccolò. The most famous painting is the “Majesty” painted by Lippo Memmi. 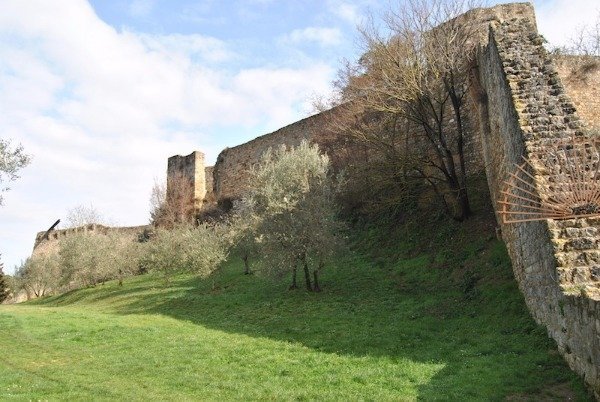 The highest spot of the town, a panoramic point of view . From one of the towers we can enjoy one of the most characteristic views of the town as well as the valley. Built in 1353, when San Gimignano devoted itself to Florence, on a pre -existing Dominican Convent, the fortress lost every military importance in 1555 when Cosimo I ordered its destruction. 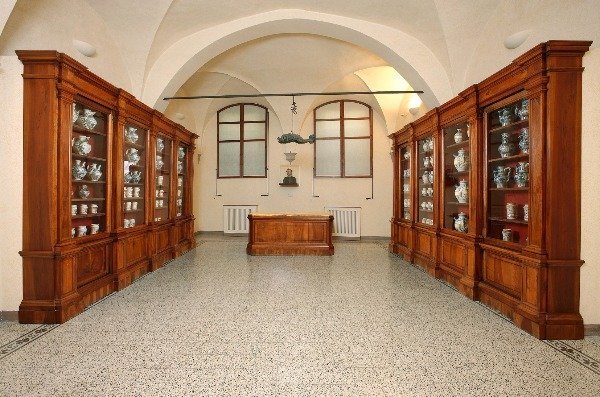 They are in an unique exhibition (ex Conservatorio di Santa Fina) in Via Folgore,11. The Archaeological Museum contains artifacts found on the Etruscan territory especially in the area of Ranza and Cellole.

The Spezieria di Santa Fina, offers a collection of ceramics from the ancient city pharmacy active from 1253 to 1900.

The Gallery of Contemporary Art, includes a rich collection of works owned by the Municipality of famous contemporary artists.

The Church of St. Agostino 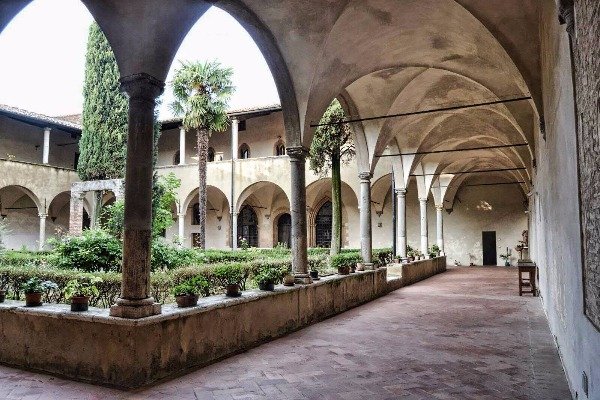 The Church of St. Agostino is a little treasure chest full of artworks. For example inside you can find San Bartolo’s Chapel with Benedetto da Maiano’s Altar. The Church’s vault was painted from Sabastiano Mainardi, while the majolica floor it’s a work of Andrea della Robbia. The two masterpieces of the church are: “ The Coronation of Maria del Pollaiolo”, located on the greater altar and The Stories of St. Agostino’s life, a series of frescos by Benozzo Gozzoli that is located inside the Choir’s Chapel.